Notes from graduates at U of T, Western and McMaster give new students – and alumni engagement offices – a boost during a difficult time.

In his first week of medical school at the University of Toronto, Prem Nichani was profoundly moved by a letter he received from a young doctor. Written by a U of T graduate, the note holds no bromides along the lines of, “Med school is great, you are going to have fun, you are going to be a doctor, you are going to make good money,” Mr. Nichani noted. Instead, “it was very real, and that’s what I appreciated about it.”

Mr. Nichani keeps the letter in his study and refers to it often as he embarks on his own exhaustive training to become a physician. Medical school is challenging, he said, and the moral support from alumni means a lot.

At the medical school’s orientation last fall, Mr. Nichani and each of his new classmates received a unique letter written by alumni who had responded to a call for “words of wisdom” for the incoming class. It’s a practice the faculty of medicine has continued since 2013.

Similarly, first-year students at Western University in London, Ontario, receive handwritten “kind notes” from alumni during their first set of exams. “Exams are tough. Never underestimate the power of a Spoke bagel and good coffee to recharge,” a 2014 graduate wrote this past December, referring the legendary bagels sold at a campus eatery called The Spoke.

The Kind Mail project – now in its second year – has been a hit with alumni, who have lit up Western’s social media platforms with their effusive #kindmail messages.

McMaster University in Hamilton has “welcome postcards” that it distributes to new students – an initiative launched in 2017-2018 academic year. When life sciences student Emily Grunthal arrived at her residence suite in the fall, having never met her three new roommates, there was a postcard on the fridge with a note from a recent graduate scribbled on the back. The grad wrote that almost everyone suffers from first-day anxiety: “We’ve all been there,” it read, but McMaster is “a very welcoming community.” Ms. Grunthal recalled that the writer advised the new students to “go out, do sports, do clubs” – and don’t be afraid to ask for help if you need it.

“It was just this really thoughtful postcard and  we were all sitting around our new kitchen table reading it together, which was kind of a nice moment,” Ms. Grunthal recalled.

Alumni relations officers from U of T, Western and McMaster say the request for notes of advice has engaged alumni of all ages. “It’s quite a range of participants for this particular campaign, but we do see some of the younger grads participating, which is always really nice,” said Meghan Cocurullo, digital engagement officer at Western’s department of alumni engagement and development. Western received about 1,400 Kind Notes in 2016 and again in 2017. (In February, the University of Victoria launched its own version of the Kind Mail campaign, soliciting “friendly words” from alumni to be delivered to students on postcards throughout the month of March.)

McMaster gathered between 1,400 and 1,500 alumni notes in the first year of its Welcome Postcards program – a response that left alumni relations staff icing their wrists after hand-writing all those messages onto postcards, said Scott Mallon, alumni officer responsible for student relations. U of T received more Words of Wisdom letters from doctors than it has first-year medical students, so staff have banked some for next year’s class, said Julie Lafford, director of alumni relations and annual giving at the faculty of medicine. 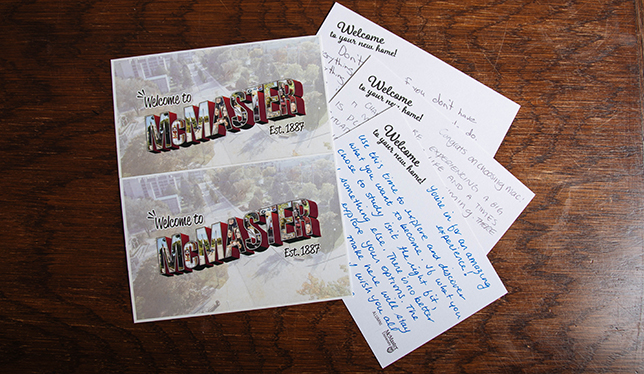 “Like most schools, we have a small group of highly engaged alumni and then we have a larger group of professionals who maybe want to be engaged but don’t necessarily have the time or energy,” Ms. Lafford said. “We call it [Words of Wisdom] the five-minute volunteer opportunity. It makes a difference as part of a continuum of engagement.”

The notes make a difference to the students receiving them, too. Mr. Nichani said whenever he is feeling tired or stressed, he reflects on that letter he received from emergency medicine resident Ahmed Taher, who graduated from the med school in 2014.

“Medicine is a privilege and not a right,” Dr. Taher wrote. “People welcome us into some of the most private and intimate portions of their lives. We experience the miracle of life, the loss of death, people’s deepest fears, darkest moments and huge triumphs. It is a privilege that we must acknowledge, and this can keep us going through those long nights when you are lacking sleep and food and you are on the verge of burning out.”

Notes from graduates at U of T, Western and McMaster give new students – and alumni engagement offices – a […]